-A +A
Home / Discovering / Calais Lace / The lace and fashion center

The lace and fashion center

Lace, a symbol of French luxury.

The Cité de la Dentelle et de la Mode (Lace and Fashion Centre) is a must for those who want to learn all about this notable local industry. So great was the influence of lace on Calais and its contribution to the shaping of the southern part of the city, that visitors to Calais simply overlook this skilled craft, which has become a symbol of French luxury.

This major Calais attraction is situated right at the heart of the Calais Sud quarter, formerly the town of Saint Pierre, which merged with Calais in 1895. Designed to appeal to experts, non-experts or simply “lovers of all that is beautiful”, the collections are displayed in an old collective factory typical of the Calais lace industry of the late 19th century. At that time, it was not unusual to find several lace companies housed in one factory where, of course, they had to try to keep their secrets out of sight of their neighbours... and competitors! 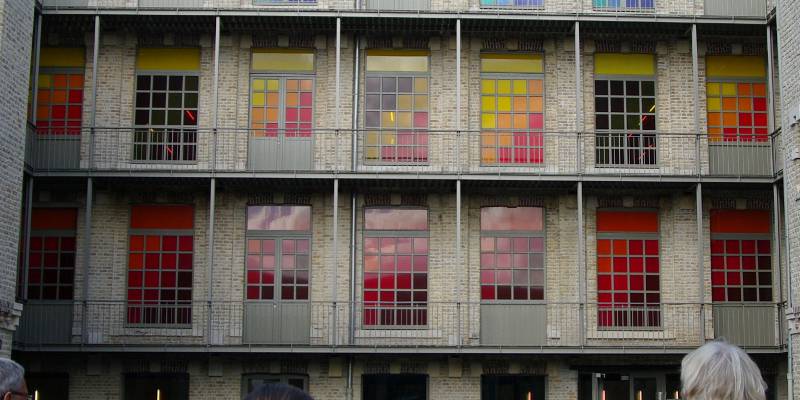 Inside courtyard of the Cité de la dentelle

The only modern element of the Citéde la Dentelle et de la Mode is its wave-like façade... reminiscent of the sea which separates France from England. And it was over that same sea that three Englishmen brought (or rather smuggled!) the first lace making machines. Calais lace has quite a story attached to it... and that fascinating story has been told here since 2009, when the “Cité dentelle” first opened its doors. Its modern design means that it is fully accessible to people with limited mobility and, in a nod to the English smugglers who arrived by sea, the Cité Dentelle is served by the Calais Majest’in canal boat.

After the hand-made lace of the 16th century and the development of the lace industry in the Calais-Saint Pierre of the 19th century, the centre’s vast exhibition halls (former workshops) then bring us right up to date, highlighting contemporary lace and its use in the fashion industry. The machinery and processes also feature prominently: be sure not to miss the demonstration of the impressive engineering of the mechanical looms with explanations provided by a former lacemaker.  The processes used to make Calais Lace are also employed in Caudry, near Valenciennes. The only difference is the size of machine used. Basically, lingerie is made in Calais and Caudry produces dresses and outfits. And so, recent brides such as Kate Middleton or Amal Alamuddin (aka Mrs George Clooney!) have worn “Dentelles de Calais” dresses made in Caudry.

But the Cité de la Dentelle et de la Mode is more than a museum - it’s a hive of activity with a programme of temporary exhibitions and workshops for children and adults, the “Les Petites Mains” restaurant and a lecture hall. Fashion lovers and textiles enthusiasts won’t want to miss the well stocked documentation centre which specialises in these areas. Finally, we must suggest a visit to the 3D changing room, a fun area where you can take your own measurements with the utmost precision... and then create your own avatar.

Also, Calais city of Lace and Fashion is part of the Google project "We wear culture", with its virtual visit.