-A +A
Home / Giant Mechanical Animals parade in Calais...

Calais is to host the European debut of The Hidden Temple Show featuring a gigantic mechanical dragon-horse and a colossus of a spider in a mind-boggling, magical, free street show that will take place over four days in June 2016. The incredible and huge machines have been created by the master of machine puppetry, François Delarozière of La Machine. His imaginative inventions have been thrilling crowds on the Island of the Machines in Nantes for quite some time and now Calais will see the dreamlike giants taking to its streets for a unique performance.

From 23-26 June, 2016 the ginormous dragon-horse known as Long-Ma and a huge spider known as Kumo will reign over Calais town.

Created by the legendary Francois Delarozière, the machines, operated by riders, will perform, breathing fire, fluttering their eyelids, walking and wowing everyone who sees them. Working with the Calais National Theatre, Le Channel, and its director Francis Peduzzi, an astonishing episode of truly matchless street theatre will come to life in Calais.

Just check out the video of the dragon-horse Long-Ma in action at the Olympic Park, Beijing, China, to get a flavour of exactly how dazzling the show is. 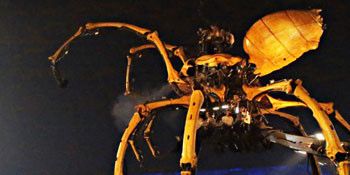 Weighing in at a whopping 2 tons, Kumo, the spider, has a wingspan of 7.5m and stands 4.5m high. It walks and waves its legs, brought to life by operators who sit atop the lofty arachnid, it is strangely life-like but without the fear factor.

This is fun for the whole family and kids will love the enchantment and mystery of these breath-taking machine creatures right in front of their wide eyes. It’s not frightening, it is instead, a bit crazy, strangely organic and simply stunning; it is the stuff of dreams for old and young.

Details of this fabulous free show in Calais

Thursday 23 to Sunday 26 June 2016: see the animals walk the streets of Calais. Be amazed as smoke swirls from the fire-breathing Long-Ma’s nostrils and it “eats” from the tops of trees, galloping and walking and being the centre of attention. Where Long-Ma is, Kumo with its beady eyes is sure to follow, an awesome sight with its long legs unfurling and a lurid bulbous body.

Thursday 23 June, in the grand courtyard of Le Channel Theatre: see the machine beasts enjoying a sleep over. Here you’ll discover more of Delarozière’s work as he contributed to the architectural refurbishment of this sprawling complex of buildings.  Enjoy Le Channel’s cool bistro and groovy restaurant while you’re there

Sunday 26: The Final: a last goodbye to the Calaisians and visitors to the town. 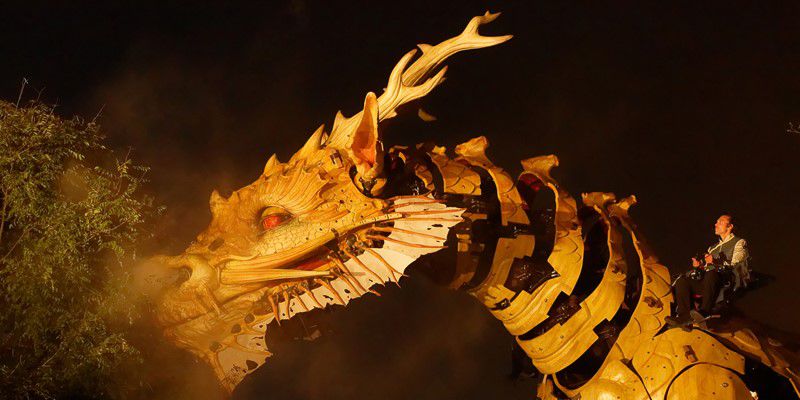 You can expect to see the astonishing sight of the giant machines in the streets, the market place and everywhere that daily life takes place and I guarantee, people will stop in their tracks and stare in amazement. Think steampunk meets Godzilla on a local street corner and you can’t help gawping in awe. It’s the very ordinariness of the setting that adds an extraordinary and thrilling aspect to the show.

There are lots of great cafés and restaurants to take a break, museums, shops and even a golden sandy beach to enjoy a picnic if the sun shines. Nip to the tourist office to get lots of advice and details of what to see and do while you’re there.

Other articles of Janine Marsh